Childhood Obesity - This is by far and away, the Greatest risk factor for developing SCFE.  As our children continue to grow faster, bigger and heavier with each generation, the limits of what our bodies can tolerate are constantly being tested.  The force and pressure of a larger child walking and running on their developing hip simply overcomes the strength of the delicate growth plate that acts as a "superglue" between the femoral head and the rest of the femur, and the head slips off.

Males - Although it is not fully understood why males are at a higher risk of developing SCFE, it is generally thought that the more aggressive and active nature of young boys playing serves a role in this factor.

African American / Pacific Islander - Generally, these children are much larger than other children of their same age, and this ties back into the added stress of being heavier than the growth plate can tolerate. 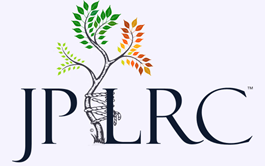 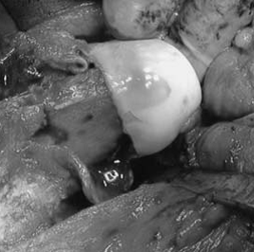 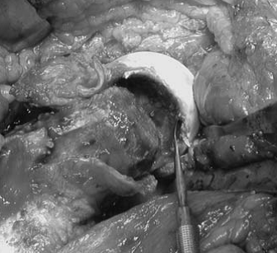 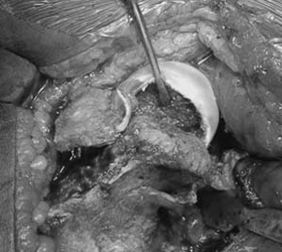 Moderate slip on the R hip with one screw placed in situ.

One screw placed prophylactically in the R hip. 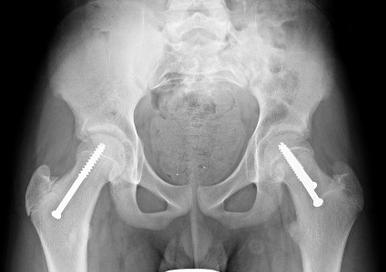 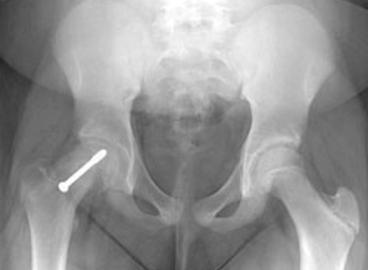 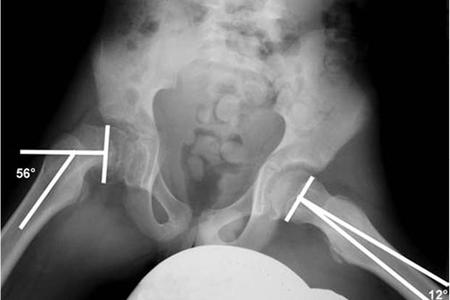 An Overview for Parents:

Slipped Capital Femoral Epiphysis, or SCFE as it is more commonly referred to, is a pathologic condition that affects the proximal femur in young children whose growth plate is still open.  Essentially what happens is that the femoral head slips backward off of the femoral neck.  Think of it as the ice cream falling partway off of the ice cream cone.  Sometimes this can happen very suddenly, and other times, it can happen gradually over a period of weeks, and even months.  This is a very serious problem for your child.  As the head slips backward, it stretches and sometimes tears the tiny blood vessels that supply it, and this can lead to whats called Avascular Necrosis (AVN).  AVN is when parts of the head dies.  Similar to Legg-Calve-Perthes disease, when the femoral head dies, it undergoes a series of changes that leave it very mishapen and not able to function as a healthy smooth hip joint.

There is a wide variation in the amount of slip that can occur, and the severity of long-term consequences that may result.  Depending on what caused the head to slip in the first place, sometimes your child will be at risk for the other hip to be affected as well.  This is particularly true when the underlying problem is a metabolic disorder.  Please see below for a list of known risk factors.

Signs and Symptoms of SCFE:  Your child may complain of pain in the hip, leg, or even the knee.  When pain shows up somewhere else like in the knee, despite the fact that the problem is actually the hip, this is called referred pain. Parents often will recall a specific episode of playing, or maybe falling off a bike when their child complained of pain. Sometimes this can signal pain from the slip, and other times, its simply coincidental.  Frequently, the pain will subside after a couple days and children return to their usual activity level.  Early in the disease process, the body is sometimes able to heal itself by making new bone and strengthening the connection.  Your child may then go weeks, months, or even years before the next episode of pain.

Even more interesting is that some children grow into adulthood before they develop any hip pain.  At that point, it is more likely to be referred to as FAI, but the underlying deformity is sometimes highly suggestive of a mild SCFE that occurred long before.   Some children with long-standing SCFE will develop a limp, as well as, perhaps complain that they cannot move their hip as well as they used to.  If there is any question or doubt, it is always best to see your physician for an evaluation.

Diagnosing SCFE:  The first thing that we typically will order is an XRay.  We are looking for any sign of a slip in the hip that your son or daughter is complaining of pain in, as well as, in the opposite hip as well.  Sometimes, we will then order and MRI or an Ultrasound to give us more information.  From those tests and a physical examination, we are able to determine whether or not your child has SCFE.  Traditionally, Orthopedists have grouped children presenting with SCFE into two categories.  These categories make up what is known as the Loder Classification.  Stable Slips are those that are generally milder, or perhaps have been occuring more gradually, and patients are still able to weight bear, even if it requires a pair of crutches.

The other category is Unstable Slips, in which children cannot put any weight on their leg because of pain.  Patients who present with an Unstable Slip have up to a 47% chance of developing AVN of their femoral head.  Conversely, children with Stable Slips typically only develop AVN no more than 10% of the time.  Recently, we have begun to question our accuracy in using this simplified classification system because more and more, we are finding that some children who we place in the Unstable Slip group show evidence of long-standing slippage, which leads us to think that it is more a continuum along which stability gradually declines.

For that reason, we also use terms to indicate the chronicity of symptoms.  For instance, a child complaining a mild pain over a period of several weeks or months, who is diagnosed with SCFE is referred to as a "Chronic Slip."  On the other hand, the child who never before complained of any pain, but suddenly for the last few days has had a difficult time walking is referred to as an "Acute Slip."  There is always going to be the children who have pain for a bit, which then improves and only returns some time later, and that may be referred to "Acute on Chronic."

Treating SCFE:  Orthopedists use all of the above information in order to determine the most appropriate treatment for your son or daughter.  There is no role for non-operative treatment in SCFE.  The consequences of simply observing a slip is that it may get worse and go on to develop AVN.  AVN is a horrible complication that we try to avoid at all cost.  For mild slips, we place a special screw into the femur to hold it in place and keep it from getting worse.  This essentially helps the growth plate turn into even stronger "super glue" and eventually harden so that the femoral head cannot move any more.  We often use this same treatment for moderate slips as well.

For slips that are more severe, there are several pieces of information that must be taken into account, and this will ultimately determine the treatment that we recommend for your child.  There is ongoing discussion as to the best treatment which lowers the chance of AVN, while also correcting the deformity.   We learned long ago that treating SCFE like a fracture and simply putting the femoral head back in place and holding it there led to very high rates of AVN, so this was abandoned long ago.  Instead, Orthopedists historically would simply allow the SCFE to heal in place, and then years later would perform what was called an Imhauser Osteotomy that was designed to realign the proximal as best as possible.  This is still an osteotomy that we use today from time to time when the situation calls for it.

Just over a decade ago, a surgeon named Dr. Reinhold Ganz developed a procedure in which the hip could safely be dislocated, and the femoral head could be put back in place where it belonged.  This procedure revolutionized Orthopedics.  This all took place in Bern, Switzerland at Inselspital, where Dr. Harris studied and did a fellowship learning from the inventor of this procedure.  It is a very challenging operation that should not be attempted by anyone without extensive training because it remains a very risky operation.

While Dr. Ganz's results were extraordinary, we have begun to learn that there are differences in the patients we are operating on, between Switzerland and North America.  Our children are much larger and heavier, and in all likelihood, this places them at a much higher risk for more severe SCFE.  This belief seems to hold true as new research is coming out, where even with the surgery that Dr. Ganz described in which he had nearly 0% AVN, we are faced with an approximate rate of 26% AVN here in the United States. Granted, this is better than simply using only a screw and treating it the same as any other SCFE, which led to 47% rates of AVN, but there is still much room for improvement.

A newer, and less aggressive approach which has been popularized by Dr. Klaus Parsch calls for opening the hip joint capsule in order to release the pressure that has built up, and then only partially put the femoral head back in place before holding it there with a couple screws or pins.  With this technique, there was only a 10% AVN rate, but we again have to call into question the fact that the patients in this research were European and the low AVN rate may not necessarily be replicated here in North America.

Prognosis of SCFE:  The long-term prognosis for SCFE, first and foremost, depend on whether or not your child develops AVN.  This is a dreaded complication that frequently cannot be avoided, despite the most heroic surgical efforts.  If AVN develops, then we turn our attention to trying to restore blood flow to the femoral head, while doing all that is possible to limit the deformation that begins to take place.  See the section on Perthes for a more thorough discussion of Osteonecrosis of the femoral head for more information.  In the best of circumstances, we catch your child's SCFE while it is still mild, we secure the femoral head in place and prevent it from slipping further, and your child goes on to heal and remodel.  Most children who fall into this fortunate category will never complain of hip pain until well into

For patients with moderate and severe SCFE, even if AVN is avoided, they are left with a deformed femoral head and neck junction that leads to the development of FAI (Femoroacetabular Impingement).  The exception for this of course, is children who underwent a surgical dislocation at the time of their SCFE, and had the head placed back into its normal anatomic position.    As mentioned before, we often see adults who had SCFE as a child, and now exhibit the signs and symptoms of FAI.  Just as for SCFE, there are many treatment options for FAI.  We discussed the open surgical dislocation technique briefly in this section.  For more information on other techniques to treat FAI and the long-term sequela of SCFE, please see the FAI and Hip Arthroscopy sections.