The initial clotting or bone infarction process results in small areas of dead bone within the surface of the femoral head.  Sometimes we can see this dead bone on XRay, although other times the XRays may look completely normal for the first 3 - 6 months of the disease.  MRIs are able to pick up on these changes earlier than XRays, but they are seldom ordered at the time of initial presentation because they are costly, and your child's symptoms may be so vague and mild that an MRI is not warranted.  Limping and pain are quite variable in this stage, and even when present, tend to be mild or intermittent.

This is in many ways the most important stage of the disease.  It is this stage that the Lateral Pillar Classification System is based on (see below), and it involves the process of the dead bone beginning to dissolve away.  Our bodies natural reaction is to absorb dead bone and replace it with healthy new bone. Unfortunately, as the body dissolves away the dead bone, it isn't able to put the new bone until the old bone is removed so this allows the otherwise spherical femoral head to slowly begin to collapse.  The area that is most prone to collapse is what we refer to as the Lateral Pillar (the top 1/3) because this area gets pressed down as your child walks on it.  It usually takes about 6 months from the onset of the disease process in order to enter into this stage.  Patients fall into one of four categories, Group A and Group B have the best prognosis, Group B/C has an intermediate prognosis, and Group C patients have a universally poor outcome.

It is most likely that your child will demonstrate limping and complain of pain during this stage, while also frequently losing flexibility and normal range of  motion of their hip.  Parents hopefully can understand why many times, there is a delay in diagnosing your child with Perthes Disease.  So it isn't necessarily that anyone failed to pick up on the symptoms, or that your child didn't tell you, but rather, they may simply have not had enough pain that it was brought to anyone's attention.   In fact, the most common reason for seeing an Orthopedist is when a parent happens to notice that their child is limping, and not necessarily in response to pain.  This is the challenging part for Orthopedists, because catching the disease as early as possible, before any collapse of the head has occurred is something that we all would prefer.

During this phase, the body begins to lay down new bone while any residual dead bone continues to get dissolved away.  This phase can last for up to 18 months and the process can be followed with repeat XRays that demonstrate the progression.  Limping and Pain gradually improve as does their range of motion with the help of bracing and therapy.

After the majority of the new bone has been laid done, the hip joint now attempts to remodel itself.  Unfortunately, a femoral head that has already been too severely flattened during the earlier stages is typically too deformed for the body to ever shape it back into a normal round ball.  It is more likely that the head has been pressed down so that it is too wide to completely fit into the acetabulum. This is like trying to force a square peg into a round hole and what ends up happening is that that some of the cartilage on both the femoral head and the acetabulum will become irreparably damaged.  It is common for children to experience locking and popping of the hip at this stage.  Range of motion will sometimes remain restricted and this will lead to a stiff hip, that along with cartilage damage and the underlying deformed bone, over time results in a stiff and arthritic hip.  Many patients with this type of deformity also incur injuries to surrounding structures, such as a labral tear which by itself, can also be a source of pain.

(+) Family History - If you, or someone in your family has been diagnosed with Perthes, then you are more likely to have a child who will also develop Perthes.

Although the active phases of the diseases itself are limited, and it eventually runs its course, children are often left with life-long deformities of their hip joint. These frequently lead to early arthritis and significant degenerative changes by the time these children reach their 40's and 50's.

There is currently is no cure for Perthes Disease. However, many researchers, including Dr. Harris, are looking into new therapies that are designed to stop the process of the bone dying, as well as, maintain the femoral head's normal spherical shape as much as possible until the disease has run its course. 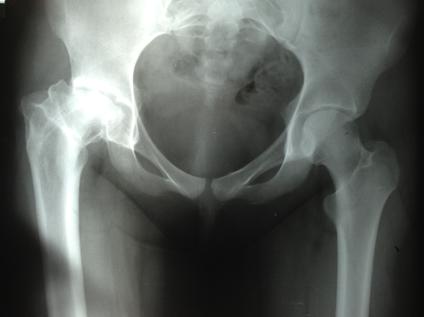 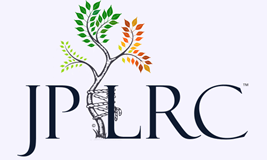 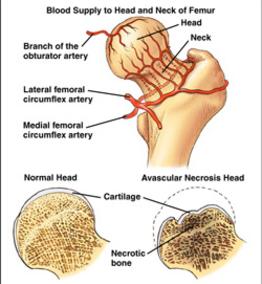 An Overview for Parents:

Perthes Disease, more accurately called Legg-Calve-Perthes Disease (LCP) for the surgeons who discovered and independently reported it in the early 1900's, is a disease that affects young children.  For reasons that we still do not fully understand, the femoral head begins to die (osteonecrosis) and go through a series of changes.   It affects approximately 1 out of every 1,200 children in the United States, most commonly between the ages of 4 and 8 years old.  Boys are 5 times more likely than girls to develop Perthes.  It generally only affects one hip, but approximately 12% of children will have both of their hips affected.  The severity of Perthes disease varies tremendously from one child to the next, and there is little we can do to predict this.

While we don't yet know what causes this disease to occur, research has found that there are several factors that are thought to be associated with developing this condition:

What we do know is that the blood supply to the femoral head is disrupted, which means healthy oxygenated blood and nutrients do not get to the cells, and so therefore they die.  Current research is looking into whether or not there is

something that causes abnormal clotting in the tiny vessels that supply this blood.  There may be genetic disorders that predispose to forming such clots, or perhaps, the body is reacting to something that it has been exposed to and as a consequence of this reaction, inadvertently forms clots within very important blood vessels.   There also seems to be a close relationship with the outlfow of blood as well, with some studies indicating that blood gets backed up in the head, similar to a clogged drain.  This raises the pressure inside the head and may lead to even more damage.

Diagnosing Legg-Calve-Perthes Disease:  There are several methods available to diagnose LCP, such as XRays, Bone Scan, MRI and Ultrasound, but MRI is by far the most accurate, as well as, the test which is most likely to detect the earliest signs of LCP.  There are many conditions that can present very similarly to Perthes, and even look similar to it on XRays.  It is very important that your child is seen by an experienced provider and accurately diagnosed early on because the treatments and prognosis for Perthes and these other similar conditions are very different from one another.

Treating Legg-Calve-Perthes Disease:  As we have already mentioned, the severity of this disease is extremely variable from one child to the next.  Some patients will have very mild symptoms that resolve in a very short period of time without the need for much intervention at all, aside from pain medicine and Physical Therapy.  His/her femoral head may remain round and healthy, and these children are unlikely to experience any long-term consequences of the Perthes.  On the other hand, some children experience a significant amount of pain and stiffness. Their ability to walk and live a normal life is severely affected.  Frequently, children develop more severe forms of the disease require surgical intervention.  Our goal is to limit the process of bone destruction and deformation of the hip joint.  Historically, these children were hospitalized for up to five years, were not allowed to walk or put any weight on their leg, and had to push themselves around in carts while remaining in braces.  The past 100 years has taught us a lot about what treatments work, and which do not, but we are still in need of a definitive approach that will allow us to predictably improve the disease process in EVERY child.

We certainly do not keep our children in hospital beds for five years any longer.   However, bracing can still be a very  important part of the treatment plan, as can be restricted weight bearing.  The JPLRC also is the only center in Florida and one of only a few in the entire country to offer the entire spectrum of more advanced treatment options, ranging from Core Decompression, Joint Distraction, Femoral Osteotomy, Hip Arthroscopy, Surgical Dislocation and Pelvic Osteotomy. as well as, cartilage restoration procedures.  There is no one treatment plan that works for every child. Your child's symptoms dictate the treatment more than anything else.   For a more thorough discussion of possible treatments, contact Dr. Harris.  He will be happy to review your son or daughter's XRays and MRIs and help you decide if an office visit at the JPLRC is recommended.   Simply Click Here.