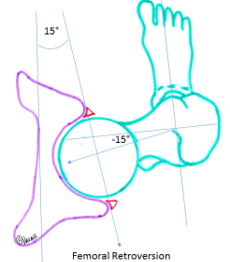 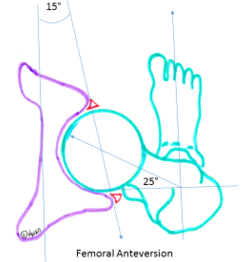 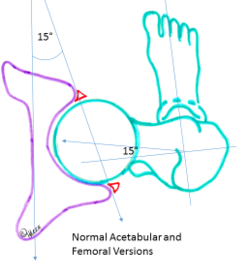 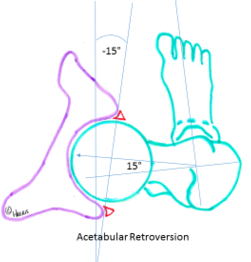 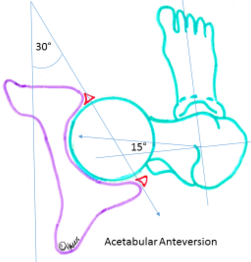 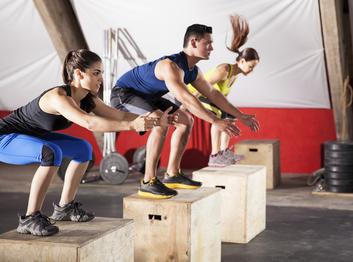 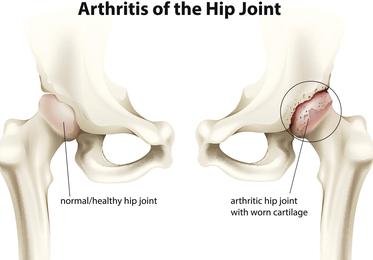 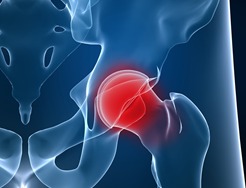 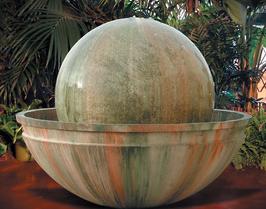 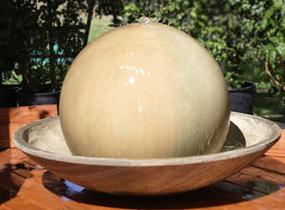 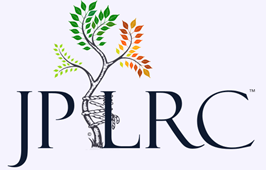 FAI is a term that is used to describe the impaired functionality of the hip joint when its range of motion and normal mechanics are limited because of abnormal anatomy.  Specifically, either the proximal femur, the acetabulum, or sometimes both are shaped in a way that is not conducive for a healthy hip joint to function.  This can be something that begins to develop as early as childhood, as is the case with the vast majority of patients who were inadequately treated for Hip Dysplasia when they were younger.  Some patients may not suffer from the typical "shallow" socket seen in developmental dysplasia of the hip (DDH) but instead have abnormally deep hip sockets, a condition referred to as Coxa Profunda.

And still in other patients, the hip joint may initially develop normally, but over time it begins to undergo dysplastic changes in response to localized trauma from sports, injury or repetitive exercises that place the hip joint in supra-physiologic positions (as seen in ballet dancers).   In most instances, the bone actually changes in a way that is intended to protect itself against further trauma or stress, but unfortunately, this often leads to impingement and further damage.  As we mentioned above, when the motion of our hip joint is pathologically restricted because of bony abnormalities, we call this FAI.  A number of injuries and conditions tend to develop in association with FAI, such as hip pain, labral tears and injury, ligamentum teres tears, and even early degenerative arthritis.  In this section, we are going to review the various forms of FAI, associated conditions, and treatment options.

First, let's review the natural history of FAI that develops in patients with dysplastic hips.  Some patients may find it useful to review Hip Dysplasia in order to gain an better understanding of this condition, which can be found elsewhere on this website by clicking the link above.  A dysplastic hip socket (acetabulum) can be shallow, improperly oriented (version), or even too deep (coxa profunda).  For example, when a patient has a shallow socket that angles backwards, we call that a dysplastic retroverted acetabulum, as seen in the images below. When this happens,

the femoral neck physically bumps into the lip of the acetabulum as the leg rotates in.  This can occur to varying degrees, and for some patients it can actually cause a profound inability for them to rotate their hips inward.  I often hear patients tell me that they've always been aware that they were unable to sit a certain way, or be able to rotate their hips as much as their siblings, or their friends ever since they were young.  But, since it never caused too much of a problem, or kept them from playing sports, they just ignored it.  This is more common than most people realize.  Generally, it often requires years and years of this repetitive bumping and torquing along with becoming heavier and stronger, thereby placing greater forces on the hip joint, before this condition results in persistent pain and disability.

Others are not fortunate enough to make it into adulthood symptom-free, and instead, these patients develop symptoms of FAI, and some of the associated injuries at a much younger age.  Competitive dancers, gymnasts, hockey players, and patients with a history of SCFE are especially prone to developing FAI.

We mentioned a moment ago that FAI frequently presents in patients with a shallow acetabulum, which is indicative of underlying hip dysplasia.  To better conceptualize this condition, we should imagine a ball that sits inside of a deeper bowl and compare that to a ball of the same size sitting in a more shallow cup.  The ball that is inside the deeper bowl is going to be very stable and is unlikely to roll out, even if pushed. The same cannot be said for the ball inside the more shallow bowl, or in this case, the dysplastic acetabulum.  That ball will require extra work from all of the hip muscles, joint capsule, bumper cushion (labrum) and other soft tissues in order to prevent it from sliding out during walking, running, squatting, jumping and so on.

Putting our hips in certain positions, or engaging in certain activities can sometimes place so much stress on the joint that the ball no longer remains securely within the bowl, and we call this general scenario Instability. Patients who suffer from hip instability will often present to the office with capsular strains, muscle strains, labral tears, possible a torn ligamentum teres, and sometimes even a history of frankly dislocating their hip.

We must keep in mind that the femoral head is covered by articular cartilage, and repetitive sliding, rubbing, or bumping as occurs during FAI damages this cartilage.  Damaged cartilage is not able to provide protection to the joint and allow for smooth gliding, and over time, Arthritis begins to develop...oftentimes, in patients who are very young all because of an underlying bony deformity that is very easily treated.  The key is identifying FAI early before arthritic changes begin to occur, and correcting the underlying problem(s).

The other side of the hip joint that can be deformed is the proximal femur.  The two most common deformities that we see in FAI which involve the proximal femur are excessive torsion, and/or decreased femoral head-neck offset.  We occasionally run into problems is the neck-shaft angle is too high or too low, as well.  Let's take a closer look at these.  Just as we said that an acetabulum which is retroverted (points too far backwards) causes the femoral neck to bump onto the lip of the socket, the same can also occur if the femur grows overly "twisted."  We refer to this as torsion if it involves the femoral shaft, and version if it involves to upper part of the femur where it connects to the neck and the ball.  As you can imagine, having too much "twist" (anteversion), or too little (retroversion) causes the femoral neck to either bump into the lip of the hip socket when twisting in, or the trochanteric are of the femur to bump against the part of the pelvis we sit on in the back when turning outward.